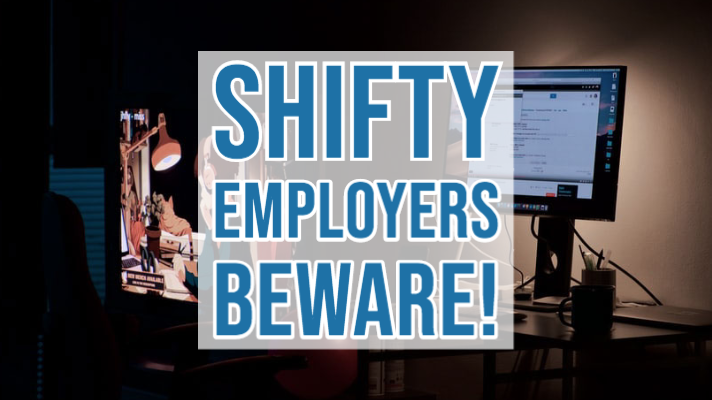 You made the most of your office space. You kept employee square footage down with an open plan and maybe even benching. Now with a COVID-conscious reopening, you have to come up–somehow–with a scheme for social distancing. Pretty quickly it becomes clear that the math isn’t going to work.

You need the headcount because you still have plenty of business. On the other hand, you don’t want to lease more space because the space you have is already costing you more than enough. Outsource? Expensive and undependable. How about going to a night shift? Wait a second–you already pay for that space at night even though it’s not occupied (except for a few of the IT guys). Add a night shift, and everybody can dance in a circle with their arms outstretched and not touch anything but rapidly recirculated air! Stroke of genius. Cover of Forbes magazine.

Okay, that’s getting ahead of things. First, who will be shifted? Well, what will the ones you select say when you tell them (hint: “Oh, ___!­–fill in their favorite 4-letter word)? Obviously, then, you won’t want to antagonize your top performers or the ones who might give you a hard time (dirty looks, lawsuits, etc.). So it shall come to pass that the meek (and the second-raters) will inherit the new shift. With the team stripped of leadership, better judgment and initiative, expect some major hits to productivity.

Those in the second shift you do care about keeping will probably realize that they have other options. They will use their newfound free time during the day to interview. As people leave (and for reasons discussed below), the situation will deteriorate. What’s more, with a dysfunctional night shift, it is inevitable that the morale of the day shift will decline. Managers who could perhaps restore some stability will only tolerate temporary assignment to the shift.

All this is to say­­–a second shift probably won’t work.

People who are used to working days generally resist working odd hours for good reason. It doesn’t take a scientific study to show how destructive it can be to family and social life. But, studies have shown that it is also a hazard to both your mental and physical health. Night work, like flying across time zones, disrupts your circadian rhythms (your body’s internal clock). The effect can be like persistent jet lag:  The American Psychological Association lists symptoms including sleepiness at work, inattention, lethargy and metabolism changes. Ten to 40% of night workers suffer from this, according to the Cleveland Clinic. The condition is known as Shift Work Sleep Disorder. The Cleveland Clinic cautions that affected workers can be difficult to deal with, have more accidents, are prone to making mistakes, tend to be poor at coping and subject to alcohol and drug abuse. Researchers have also observed higher susceptibility to heart disease and cancer.

What you can do, particularly if your organization brings people together largely to process paper, is invest in document conversion technology. People would then be empowered to work from home. Alternating days in the office is far preferable to instituting shifts. Or you could get additional office space where it’s less expensive. In any event, if you weren’t a shifty employer before all of this, now is hardly the time to begin.

DATABASICS is relied upon by leading organizations representing all the major sectors of the global economy: financial services, healthcare, manufacturing, research, retail, engineering, nonprofits/NGOs, technology, federal contractors, and other sectors.

DATABASICS provides cloud-based, next generation Expense Reporting, Timesheet Management, and Invoice Processing automation to customers in all industries in more than 140 countries. Specializing in meeting the most rigorous requirements, DATABASICS offers the highest level of service to its customers around the world.
Request A Quote